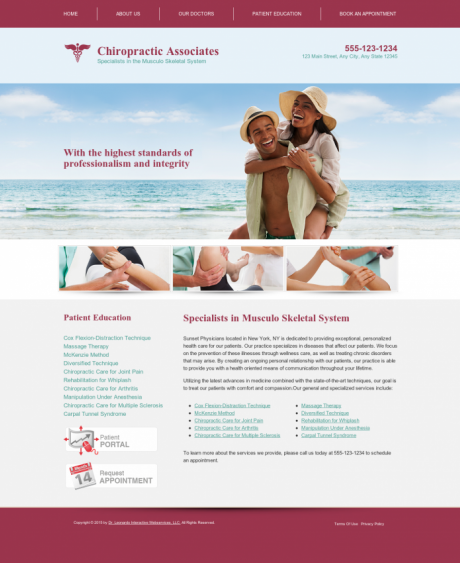 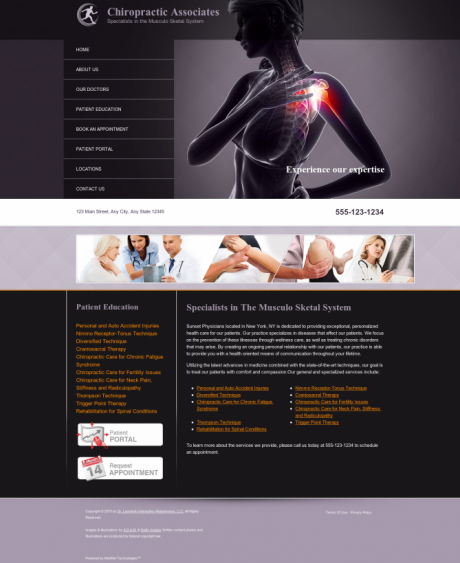 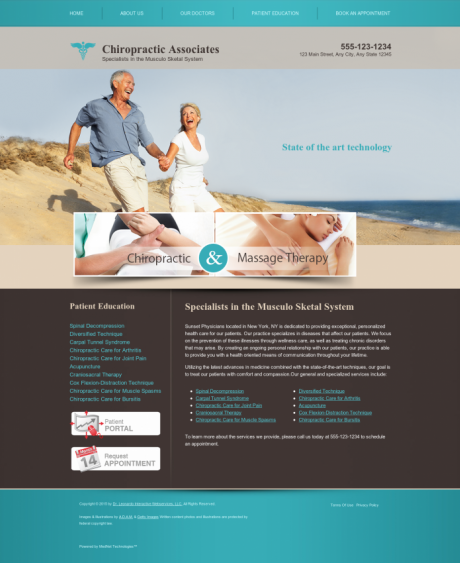 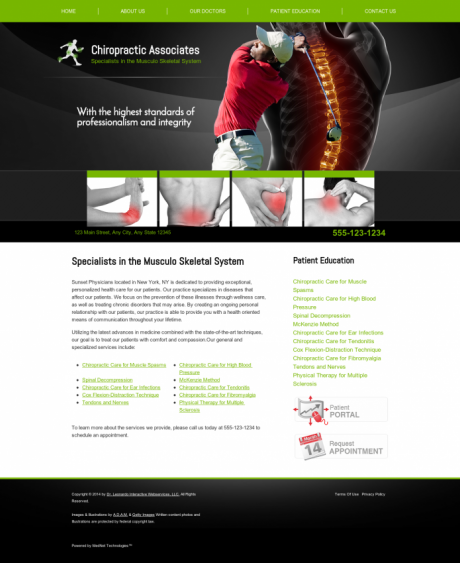 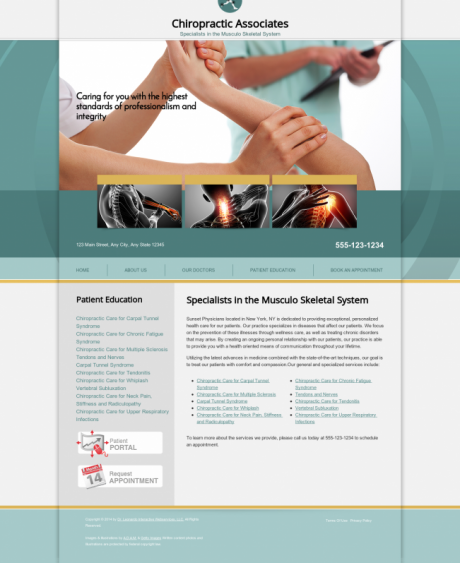 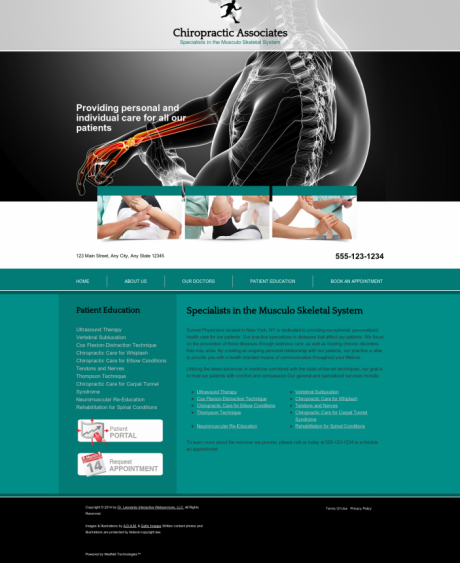 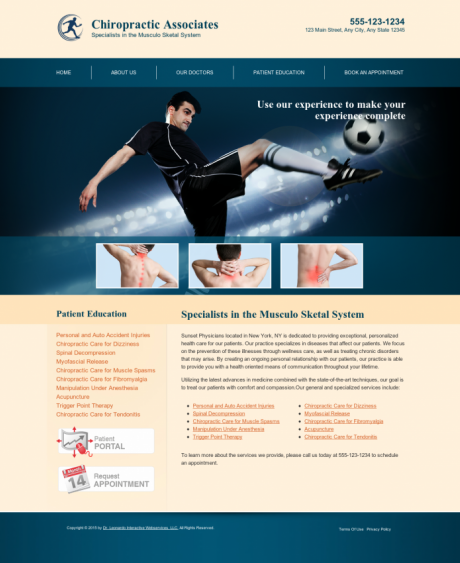 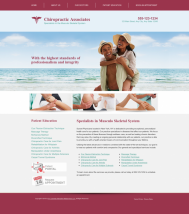 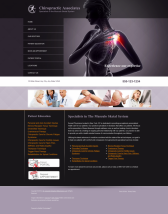 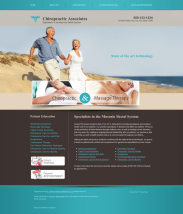 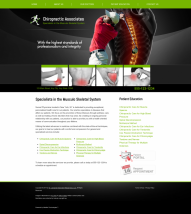 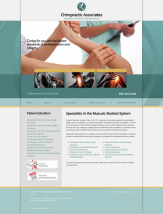 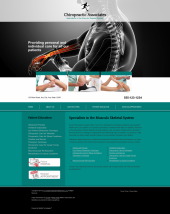 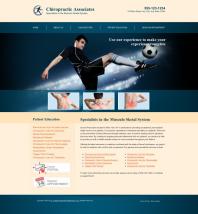 Do It YourselfWe'll Do It For You

Dr. Leonardo PROVIDER-Sites are designed to deliver the biographical information about you that patients are seeking when they search on the web, right on the Home Page.

Use your Virtual Telephone Number (VTN) to forward calls to the Front Desk or Scheduling Center for your office - it follows you wherever you go as a healthcare professional!

Optimize for All Devices

Design Themes for Every Healthcare Specialty

Your Patients Are Getting LOST! Healthcare practices are required to provide HIPAA-compliant security when communicating electronically with their patients and other providers. Dr. Leonardo websites reside on the same HIPAA-compliant cloud-hosting network that is used by many EHR systems to secure sensitive patient data.

With Dr. Leonardo, you can feel confident knowing that your website, its content, and any patient communications are fully protected and secure. Dr. Leonardo features analytic reporting on visits to your website, which pages were viewed, and how your site is indexed throughout the web:

Website Performance Reports are emailed automatically at the end of each week, and are also available dynamically on the Dr. Leonardo Console Dashboard. Feature patient reviews and five-star ratings on your website from third-party partners such as Doctor.com and others.

Are You a Doximity Member? Your Doximity® Profile can be used to create your Dr. Leonardo website: All Dr. Leonardo websites have built-in automated SEO functionality so patients will be able to find you by individual name and by practice name on Google, Yahoo!, and Bing.

You can further customize your search engine settings for individual pages by editing page titles and descriptions, H-tags, image-tags, keywords and all written content including patient education pages. 8,800+ Unique Topics to Choose From – All Completely Editable

With more than 8,800 topics featured in the Dr. Leonardo Library, you can quickly and easily create patient education webpages for your site. All content is editable and you can add additional information too. Information on the conditions you treat and the services you provide establishes authority with search engines and credibility to your patients. The voice-recognition feature of your patient’s phone will automatically access this telephone number whenever dialing. Use your Virtual Telephone Number (VTN) to forward calls to the Front Desk or Scheduling Center for your office. If you change your place of employment, simply redirect your VTN to forward calls to your new location. Patients expecting to schedule appointments with you won’t accidentally wind up at previous offices where you once worked.

Getting a VTN is easy – just enter your area code when building your site and Dr. Leonardo will take care of the rest.

Your Virtual Telephone Number (VTN) follows you as a professional wherever you go! Your patients will love the ease and simplicity of scheduling appointments themselves at your website. Put your patient portal where it can’t be missed – on your website!

Now that your practice has made the switch to electronic medical records, your website is more important than ever. Meaningful-Use regulations require your patients have online access to view their records so your practice may qualify for financial reimbursement. Providing access to your patient portal has never been easier, and your patients will appreciate the seamless experience as they access their portal directly from your website. With most patients accessing the Internet using smartphones, your website will be able to keep up.

With responsive mobile-optimized designs and one-touch navigation, Dr. Leonardo websites are easy to use and give you the ability to stay compatible with the latest technology. Dr. Leonardo PROVIDER-Sites are designed to deliver the biographical information about you that patients are seeking when they search on the web, right on the Home Page. Customize your PROVIDER-Site by uploading your portrait photo, changing color schemes and adding your professional credentials. Design Themes for Every Healthcare Specialty 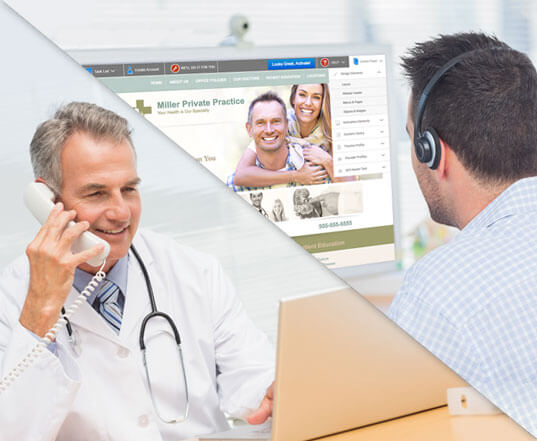 No Time? No Problem.

Like the DIY idea of Dr. Leonardo websites, but just don’t want to Do-It-Yourself? We understand! Fussing over website details isn’t for everyone. But we do love building websites with our builder and we’re kind of obsessive about how we do things. Plus, we can build them lickety-split – typically in 48 hours or less. So, if it’s easier, we’ll do it for you! And we promise – you’ll love the finished site as much as we loved building it.

The Activator Technique of chiropractic treatment makes use of a device known as a mechanical force, manual assisted instrument (MFMA) as an alternative to manual manipulation of the spine or joints. Considered a gentler form of chiropractic treatment, the activator technique involves using the MFMA, a handheld spring-loaded instrument, to deliver enough kinetic energy to the spine to move the vertebrae slightly, correcting misalignment. This treatment method is commonly employed to relieve back pain, neck pain, and various types of headaches. Some studies indicate that the Activator Technique may be as effective as manual adjustment in relieving back pain.

The Activator Technique, like some other chiropractic treatments, involves analysis of leg length in order to determine misalignment. Presuming that leg length inequality, unless congenital or the result of an injury or disease, indicates a spinal subluxation, the practitioner examines the patient in order to identify such inequality and test certain neurological responses. The chiropractor can then restore spinal balance using the MFMA device. Besides the Diversified Technique, the Activator Technique is the treatment most commonly used by American chiropractors. More than half of the chiropractors practicing in the United States use this method of treatment with at least some of their patients.

With the patient lying prone, the chiropractor evaluates any discrepancy in leg length. Such inequality is usually the result of the patient’s posture, which puts more weight on one hip than the other. Once the doctor determines that there is a leg length inequality, the MFMA device is used to move the vertebrae into alignment. The practitioner normally moves the instrument progressively up the spine from the lumbar to the cervical region The goal of the Activator Technique is to relieve pain and restore motion to the subluxated vertebra or joint.

Benefits of the Activator Technique

The chief benefit of the Activator Technique is that the thrust to the patient delivered by the MFMA is of high velocity and low amplitude. Because the thrust of the MFMA is so quickly applied, the patient’s muscles don’t have time to resist. The MFMA instrument can pinpoint the location of the problem precisely and administer pressure more exactly. This Activator Technique is considered especially helpful in adjusting children, who may have trouble lying still, and older patients, who may be more susceptible to pain or injury because of arthritis or osteoporosis. Why is Dr. Leonardo clinical content so important? Aside from saving you a ton of time when building out your website, its biggest value is a result of Natural Language Processing and modern search trends.

Search has adapted to Natural Language Processing — everyday language, as though a visitor is asking a question of someone (think of Apple Siri® or Amazon Alexa®). Yet, a search engine’s primary function is still to match a visitor’s search query to the most relevant website that is likely to answer the question.

See How it influences the first page of search results.

Dr. Leonardo connects your practice name with the patient education associated with your healthcare specialty. This gives your website an incredible level of authority with Google, Yahoo! and Bing, especially when your name is paired together with a health condition, insurance plan or hospital network.